Peat has written many articles on the topic of quinones and their effects on metabolism / respiration. The earliest official work probably started around the time of William Koch in the early 20th century and continues to this day. Many people are familiar with the popular quinone CoQ10 but there are other ones Ray has written about over the years, including anthraquinones like emodin and napththoquinones like vitamin K. Vitamin K has recently been found to be able to server as an alternative electron carrier for the electron transport chain even in the complete absence of CoQ10, so its importance in metabolism is indisputable.
Another napththoquinone that William Koch worked with in his later life while exiled in Brasil was lapachone - found in the bark of the Lapacho tree (aka Pau D'Arco, Tabebuia avellanedae). Lapachone was intensively studies in the 1960s and 1970s as a treatment for cancer but interest waned as the genetic theory of cancer conquered academia and the medical profession.
Being quinones, both emodin and beta-lapachone are intimately involved in the proper functioning of the electron transport chain, the recycling of NADH back to NAD and protecting from the systemic effects of stress and aging. In addition to these metabolic / systemic effects, both quinones have been shown to have a staggering array of effects including protecting from radiation, hypoxia, inflammation, endotoxin, diabetes, cortisol, aldosterone, estrogen, prolactin, serotonin, histamine, nitric oxide (NO), carbon monoxide (CO) viruses, bacteria, fungi, and even the aging process in general. Given their profoundly systemic effects, it is very likely that these two quinones can contribute to improved well-being and resistance to stress, aging, and frailty. The full list of references on both substances is so large that I had to post them as separate threads, which can be found at the bottom of this thread in the References section. As a shorter alternative, below are a few quotes from Peat in regards to these amazing substances.

Cascara, energy, cancer and the FDA's laxative abuse.
"...Emodin inhibits the formation of nitric oxide, increases mitochondrial respiration, inhibits angiogenesis and invasiveness, inhibits fatty acid synthase (Zhang, et al., 2002), inhibits HER-2 neu and tyrosine phosphorylases (Zhang, et al., 1995, 1999), and promotes cellular differentiation in cancer cells (Zhang, et al., 1995). The anthraquinones, like other antiinflammatory substances, reduce leakage from blood vessels, but they also reduce the absorption of water from the intestine. Reduced water absorption can be seen in a slight shrinkage of cells in certain circumsstances, and is probably related to their promotion of cellular differentiation."

"...Emodin isn’t a magic bullet (in fact it isn’t a bullet/toxin of any sort), but when combined with all the other adaptogens, it does have a place in cancer therapy, as well as in treating many other ailments. None of the basic metaphors of mainstream medicine--receptors, lock-and-key, membrane pores and pumps--can account for the laxative, anticancer, cell-protective effects of emodin. The new interest in it provides an opportunity to continue to investigate the effects of adjusting the electrical state of the cell substance, building on the foundations created by William F. Koch, Albert Szent-Gyorgyi, and Gilbert Ling."

"...Emodin and the anthraquinones (and naphthoquinones, such as lapachone) weren’t the reagents that Koch considered the most powerful, but emodin can produce to some degree all of the effects that he believed could be achieved by correcting the cellular respiratory apparatus:Antiinflammatory, antifibrotic (Wang, et al., 2007) antiviral, antidepressant, heart protective, antioxidant, memory enhancing, anticancer, anxiolytic and possibly antipsychotic."

"...Emodin, an anti-inflammatory substance found in cascara sagrada bark and other plants, is similar to other molecules that have been used for treating cancer, and one of its effects is to lower HIF: "Consistently, emodin attenuated the expression of cyclooxygenase 2 (COX-2), VEGF, hypoxia inducible factor 1 alpha (HIF-1!), MMP-1 and MMP-13 at mRNA level in IL-1" and LPS-treated synoviocytes under hypoxia" (Ha, et al., 2011). MMP-1 and MMP-13 are collagenase enzymes involved in metastasis. When cells are fully nourished, supplied with protective hormones, and properly illuminated, their ability to communicate should be able to govern their movements, preventing--and possibly reversing--metastatic migration."

Heart and hormones
"...Rhubarb and emodin (a chemical found in rhubarb and cascara) have been found to have heart protective actions. A considerable amount of research showed that vitamin K is effective for treating hypertension, but again, most doctors warn against its use, because of its reputation as a clot forming vitamin. Recently, the value of the "blood thinner" warfarin, a vitamin K antagonist, has been questioned for people with heart failure (An, et al., 2013; Lee, et al., 2013). There have been several recent warnings about the production of arrhythmia by drugs that increase serotonin's effects (e.g., Stillman, et al., 2013)."

Note: This product contains raw material(s) meant for external use only, in cosmetic or other formulations designed for such external use.

Serving size: 25 drops
Servings per container: about 30
Each serving contains the following ingredients:

References:
1. Beta-lapachone / β-lapachone: Amazing Medicinal Properties Of Beta-lapachone (β-lapachone)
2. Emodin: Amazing Medicinal Properties Of Emodin
Last edited: Jan 14, 2020
The opinions expressed here are strictly my own, and provided for informational purposes only. They are not a substitute for a doctor’s medical care/advice. Health decisions about anybody should always be vetted by a doctor. Click HERE for FTC mandated disclosure of material connection.
J

Cool. Are those laxatives ?
The very concept of "marketing" is at odds with the real nature of these materials, which has to do with the protection and expansion of our nature and potential. A distorted idea of human nature is sold when people are treated as "the market."

Bravo! You're on fire man! Thanks for this wonderful work! Do you think too much quinones can be somehow detrimental? Let's say one takes k2+q10+lapodin...

Emodin definitely can be, depending on dose. I don't think beta-lapachone is. Even emodin is not laxative in lower doses and it has some pretty beneficial effects in low doses including blocking cortisol synthesis and blocking the estrogen "receptor".
The opinions expressed here are strictly my own, and provided for informational purposes only. They are not a substitute for a doctor’s medical care/advice. Health decisions about anybody should always be vetted by a doctor. Click HERE for FTC mandated disclosure of material connection.

Makrosky said:
Bravo! You're on fire man! Thanks for this wonderful work! Do you think too much quinones can be somehow detrimental? Let's say one takes k2+q10+lapodin...
Click to expand...

Thanks! I really enjoy doing this.
I think you are on the right track. Too much of anything that stimulates metabolism beyond what the food/glycogen stores can handle will probably cause a stress reaction. But in lower doses, say 1/2 dose Lapodin, the effects should be more on lowering stress hormones and inflammation. I thin a few drops of Kuinone and 1/2 dose of Lapodin is fine. No need to add CoQ10 as vitamin K can serve as electron carrier instead of CoQ10. Also, the CoQ10 supplements on the market right now may not be quite pure. All of the ones I have tried give me an endotoxin reaction unlike the Thorne's vitamin K, and Kuinone.
The opinions expressed here are strictly my own, and provided for informational purposes only. They are not a substitute for a doctor’s medical care/advice. Health decisions about anybody should always be vetted by a doctor. Click HERE for FTC mandated disclosure of material connection.

With what frequency do people take emodin or beta-lapachone?

With what frequency do people take emodin or beta-lapachone?
Click to expand...

Depends on the purpose. The studies for lowering cortisol, helping diabetes, obesity, etc were all 4-8 week trials with a single daily dose in the range found in Lapodin. Cancer trials use much more beta lapachone (800mg+) but that may be out of desperation to prove a positive effect.
The opinions expressed here are strictly my own, and provided for informational purposes only. They are not a substitute for a doctor’s medical care/advice. Health decisions about anybody should always be vetted by a doctor. Click HERE for FTC mandated disclosure of material connection.
J

Thanks haidut. Coincidentally I was trying find a good source cascara today 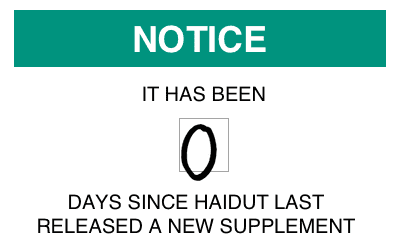 There's only room for a single digit number, but it doesn't seem like we'll need any more than that. Nice job, Haidut.

I hope you don't mind, Dan.

There's only room for a single digit number, but it doesn't seem like we'll need any more than that. Nice job, Haidut.
Click to expand...

Lol, this is cool. I have a few more coming along so hopefully we will keep it a single digit number. Also, I don't see them being more than 20 altogether in agreement of the principles of systemicity. There are only so many substances known currently to have wide systemic effect.
The opinions expressed here are strictly my own, and provided for informational purposes only. They are not a substitute for a doctor’s medical care/advice. Health decisions about anybody should always be vetted by a doctor. Click HERE for FTC mandated disclosure of material connection.

Thank you, thank you! I think the recognition should also go to Ray, Danny, and all the people form the forum who make this venue of expression free and accessible for everyone.
The opinions expressed here are strictly my own, and provided for informational purposes only. They are not a substitute for a doctor’s medical care/advice. Health decisions about anybody should always be vetted by a doctor. Click HERE for FTC mandated disclosure of material connection.

What's the absorption rate for topical? Can you expand on its into inflammatory properties?
D

Does the combo eliminate, or somewhat reduce the laxative effects?
X

Haidut, can it be used to treat constipation? if Yes, would the dosage be different from what you have listed above?
I tried cascara in the past and had to stop it due to stomach discomfort and green bowels.

My experience with a heaped teaspoon of powered tabebuia daily is that it's not laxative, while less than a quarter teaspoon of cascara is. I've been seeking info on how much emodin / lapachone in the powdered herb(s), do you know haidut?
Last edited: Jan 30, 2016
N

DesertRat said:
Does the combo eliminate, or somewhat reduce the laxative effects?
Click to expand...

This was a question for me, too.
N

haidut-
I've been taking Cascara off and on for a long time.
Same with Pau D'Arco.
Could you describe roughly how your active ingredient of those herbals
corresponds?
The Cascara and D'Arco capsules I take approximately 500mg of the bark.

I also wondered, along with the other poster, how your product might differ (or not)
in terms of the laxative effect of the barks.

(While I'm on the subject of quinones...I've wondered if you have some magic way of distilling
the active quinone from Black Cumin, thymoquinone? The products I've seen have (it seems) at lot of PUFA oil, and the one I tried had a strong taste like thyme that I'd sortuv burb up a bit, unpleasantly. Peat has mentioned the Black Cumin positively.)

Haidut,
I noticed in your pubmed listings that the emodins can inhibit fibrosis and inflammation, specifically in the heart and lungs. Could Lapodin help with cystic fibrosis since that is mainly lung inflammation and fibrosis in other organs? Seems like it would be beneficial.
"Coffee & Chocolate are like my life coaches. Coffee is there for a pat on the ****, "Go get'em, we can do this!"
And then chocolate is like, "You'll get them tomorrow. You gave it a good shot. Keep your chin up."
You must log in or register to reply here.
New posts

A
New research changes a natural substance such that it may be used as a potential treatment for acute myeloid leukemia. “ β-lapachone”

How Much Emodin Does It Take To Start Decreasing Tumor Size?

A Possible Alternative To Cascara
2