LeeLemonoil said:
A gem from ISW. 4th of August assessment. Ukraine got the tactical initiative and the Cherson-Counteroffensive is imminent

Ukraine is likely seizing the strategic initiative and forcing Russia to reallocate forces and reprioritize efforts in response to Ukrainian counteroffensive operations. Russian forces are increasingly transferring personnel and equipment to Kherson and western Zaporizhia Oblasts at the expense of their efforts to seize Slovyansk and Siversk, which they appear to have abandoned. Russian forces are also redeploying military equipment – artillery and aviation in particular – to Crimea from elsewhere in Ukraine. Russian forces have previously withdrawn from or suspended offensive operations on Kharkiv City and the southern axis to prioritize capturing Luhansk Oblast, but they did so on their own initiative based on the changing priorities of their commanders. Russian forces in this case appear to be responding to the Ukrainian counteroffensive threat in Kherson Oblast rather than deliberately choosing objectives on which to concentrate their efforts. Even after Ukrainian forces defeated the Russian attempt to seize Kyiv early in the war, the Russians were able to choose freely to concentrate their operations in the east. Ukraine’s preparations for the counteroffensive in Kherson and the initial operations in that counteroffensive combined with the dramatic weakening of Russian forces generally appear to be allowing Ukraine to begin actively shaping the course of the war for the first time.
Click to expand...

“Ukraine’s preparations for the counteroffensive in Kherson and the initial operations in that counteroffensive combined with the dramatic weakening of Russian forces generally appear to be allowing Ukraine to begin actively shaping the course of the war for the first time.”

I wish I could be a fly on the wall. Do they do write these with a straight face? Do they hire people who actually believe this stuff?

Sounds like the head office is tired of you, Oksana


Her resignation statement. Some may be lost in translation:

“Today on the anglomovnomu website amnesty international released the material in which the actions of the armed forces of Ukraine were criticized. It was created based on data collected by foreign researchers and researchers from the Crisis Response Department of our organization's global office.

The Ukrainian office was not involved in the preparation or writing of the text of the publication. And, unfortunately, already at the initial stage of this report, we have entered a dead corner where our team's arguments about the inadmissibility and incomplete of such material were not taken into account.

On their part, the representatives of the Ukrainian office did everything they could to prevent this material from being published. While our repeated objections were answered with a firm no, we also did everything we could to minimize the spread of the material. We asked authors to send us all versions of the material in advance (unfortunately, it did not happen), we convinced them to ask for an official comment from the Ministry of Defense of Ukraine, but unfortunately, they did not give enough time to receive no answers and published this study without their comment. We also categorically refused to publish this press release on our website or translate it into Ukrainian, because of its, in our opinion, unilateralism. We are very sorry that even after all the possible arguments "against" we were still not heard.

Every person from the Ukrainian Amnesty office knows that the Russian Federation is responsible for the crimes of aggression against Ukraine. Moreover, a large part of our team are people who personally had to save themselves and loved ones from the war with Russia, leaving everything behind. Some of us have already been displaced or refugees twice.

Since February 24, Ukrainian colleagues and I have worked tirelessly to ensure that all war crimes are verified and recorded for the international community. We have released more than two dozen materials about crimes committed by the Russian Federation in Ukraine. Many of the materials have had international resonance and will be repeatedly used in international institutions in the process of Restoration of Justice.

But you're right, bureaucracy, misunderstanding of the local context, flexible system of work, ignoring the opinion of the Ukrainian team and the position of the human rights community in Ukraine, all of this prevented us from stopping today's release at the stage of the idea how to its was meant 2 be. Nevertheless, with all the mentioned phenomena, we fought to the last. And we will continue to fight in different forms and in different positions, no matter what it costs us.

I and the Ukrainian office team believe in human rights, we believe in Ukraine's victory, we believe that all war crimes perpetrators must be brought to justice.

Everything Ukraine does is sus. But there was something extra about Zelensky mandating the evacuation of civilians in UA-controlled areas of Donbas this past Saturday July 30.

I just noticed this at the end of the Amnesty report on UA using civilians as human shields.

“Amnesty International contacted the Ukrainian Ministry of Defence with the findings of the research on 29 July 2022. At the time of publication, they had not yet responded.”

What’s the opposite of endangering civilians? Evacuating them. It was a preemptive PR move.

Military bases set up in residential areas including schools and hospitals Attacks launched from populated civilian areas Such violations in no way justify Russia’s indiscriminate attacks, which have killed and injured countless civilians Ukrainian forces have put civilians in harm’s way by...

Ukrainian President Volodymyr Zelensky on Saturday called on the remaining residents of the Donetsk region to urgently evacuate in what he called a "government decision."

HIMARS O'clocked. There haven't been any reports of HIMARS attacks lately. Wonder why?

HIMARS O'clock or HIMARS Time is a catchphrase used to celebrate High Mobility Artillery Rocket System (HIMARS) strikes by Ukraine on Russian forces during the 2022 Russian Invasion of Ukraine. The phrase first appeared on Twitter in July 2022 following reports that Ukrainian soldiers destroyed...

Here is a Cossack battalion(?) fighting on UA side proving once again that all this national units in the Russian army is a short-sighted idea: 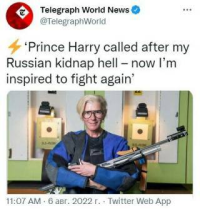 Russians are preparing full dress uniform for marches in Kyiv??? 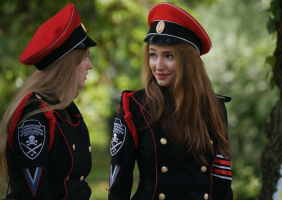 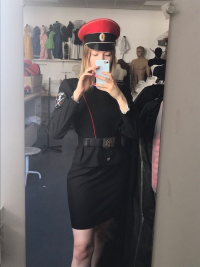 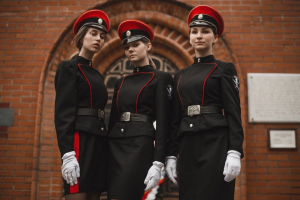 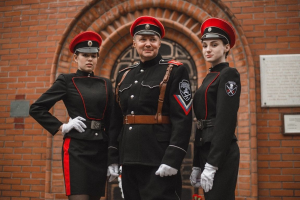 I thought so too. One of many things that stuck out to me was the woman from Amnesty - Donatella something - seeming deeply agitated that many donating countries don’t feel any responsibility to track.

She keeps throwing a wrench into it.

“I think there's an open question of why she’s so openly saying something that’s so clearly aligned with Russian talking points,” Democratic congresswoman Elissa Slotkin told CNN, adding that Spartz’s Ukrainian background gives a lot of weight to her words.

A Ukrainian-born US lawmaker has repeatedly accused Kiev of corruption, which angered Washington officials, CNN reports

Finally, Russians began to suspect something.. but would they really hit GB at some point in the future?
Truth be told: One Sarmat missile(in this very delicate case being a holy weapon of retribution) will be enough to sink the entire Island...

rockarolla said:
Finally, Russians began to suspect something.. but would they really hit GB at some point in the future?
Truth be told: One Sarmat missile(in this very delicate case being a holy weapon of retribution) will be enough to sink the entire Island...

What does „furnished by the Germans“ abd „took the Germans from us“ alludes to in this context?

Waters kind of got caught flat footed with the liberators comment. Like in Afghanistan, Iraq, Libya and Syria?

Will fight for grain and energy

Russian President Vladimir Putin is reportedly resorting to North Korean dictator Kim Jonh Un for military assistance in his invasion of Ukraine. North Korea has agreed to send 100,000 soldiers to aid Russia in its war against Ukraine, according to Russian state TV. “There are reports that...

View: https://odysee.com/@AlanTracy:8/Dean-henderson-richieallen-2022:6
You must log in or register to reply here.
New posts

A
Ukraine war offers palm oil a comeback, to the horror of green groups

B
The U.S. erected a vast network of bio-labs in Ukraine and is scrubbing details from the net

What exactly do you think is the reason of what's going on between Russia/Ukraine and potentially other countries.
17 18 19

F
We Have A Problem! - Government Orchestrated Crisis

Health Crisis? It Must Be Climate Change

B
Crisis in America: Millions of Nurses are Resigning or Being Fired Over COVID Vaccine Mandates
2

How to avoid panic in a real life crisis?

India in Covid Crisis? Look at this! Vaccine roll out and Covid increases!

'The Greatest Constitutional Crisis Since The Civil War'

The Financial Crisis In 2008 Increased Obesity, Diabetes And Mental Illness

Candida Overgrowth As A Response To Toxicity Crisis

Science In Crisis: From The Sugar Scam To Brexit, Our Faith In Experts Is Fading