Menu
Log in
Register
Navigation
Install the app
More options
Close Menu
You are using an out of date browser. It may not display this or other websites correctly.
You should upgrade or use an alternative browser.

The Impact Of A Vegan Diet On Pregnancy Outcomes

The impact of a vegan diet on pregnancy outcomes

Tomer Avnon 1,2 ● Efrat Paz Dubinsky3 ● Inbar Lavie2 ● Tali Ben-Mayor Bashi1 ● Ronit Anbar3,4 ● Yariv Yogev1,2
Received: 21 April 2020 / Revised: 28 July 2020 / Accepted: 25 August 2020
© The Author(s), under exclusive licence to Springer Nature America, Inc. 2020
Abstract
Objective To determine the effect of a maternal vegan diet on pregnancy outcome.
Study design This is a prospective observational study. Women with a singleton pregnancy who maintained the same diet
prior to, and throughout current pregnancy were enrolled. Stratification was performed according to diet type: vegans,
lacto–ovo–vegetarians, fish-eaters, and omnivores.
Results Overall, 273 women were enrolled, of them, 112 omnivores, 37 fish-eaters, 64 lacto–ovo–vegetarians, and 60
vegans. The vegan diet was significantly associated with an increased risk of small-for-gestational-age newborns compared
only to an omnivore diet (RR = 5.9, 95% CI, 1.2–21.8). The incidence of preterm birth was similar in all groups. Vegans
had lower birthweight compared to lacto–ovo–vegetarians (3015 ± 420 g vs. 3285 ± 482 g, P = 0.004), and to omnivores
(3328 ± 495 g, P < 0.001), but not to fish-eaters. Vegans also had a lower mean gestational weight gain compared only to
omnivores (11.6 ± 4.2 kg vs. 14.3 ± 4.6 kg, P = 0.001).
Conclusion The vegan diet is associated with an increased risk for small-for-gestational-age newborns and lower
birthweight. 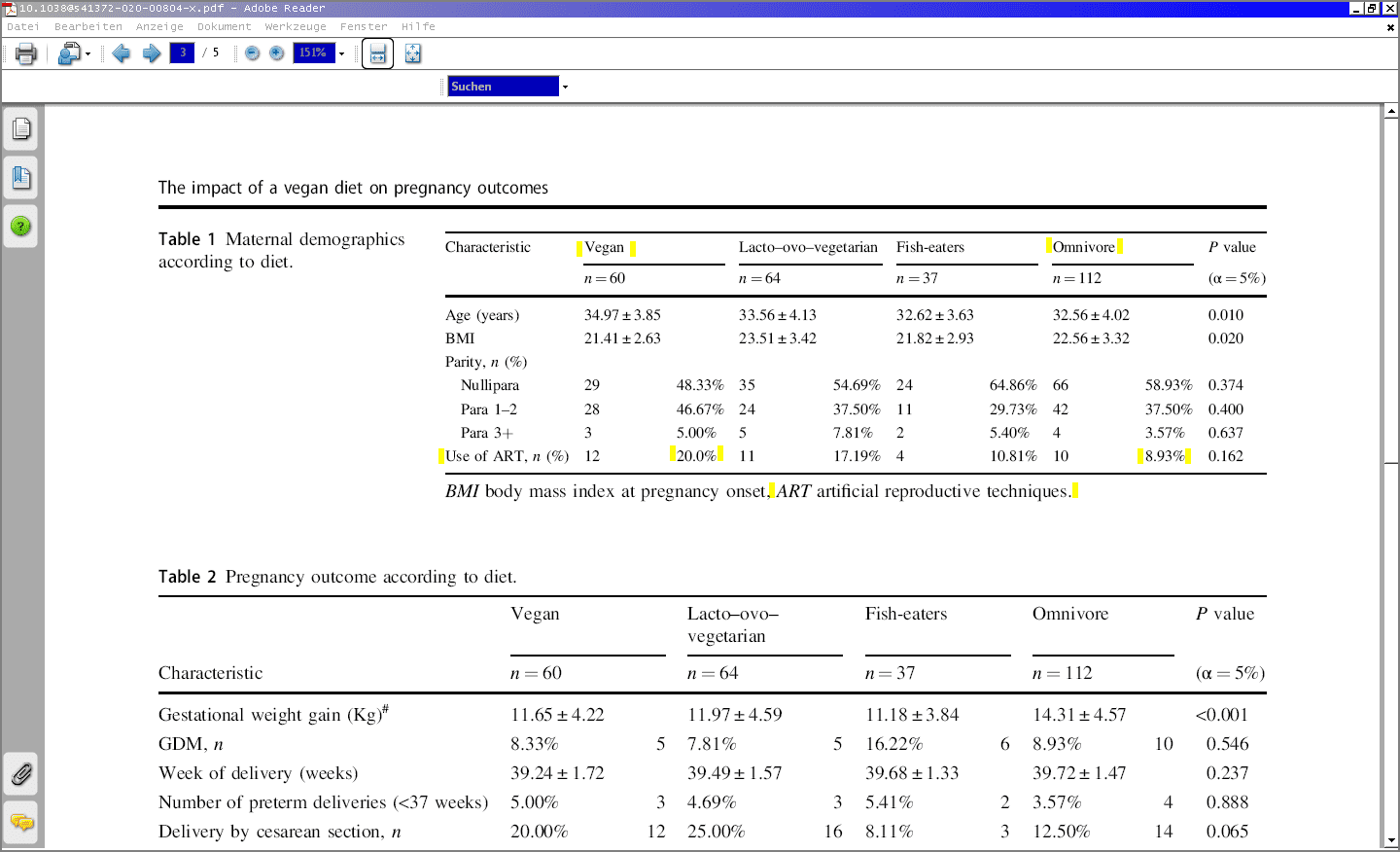 Negative effect on fertility also possible
'Heroes Never Die'
You must log in or register to reply here.
New posts

Eclampsia In The Real Organism: A Paradigm Of General.

"The Primary Sources Of Acidity In The Diet Are Sulfur-containing AAs, Salt, And Phosphoric Acid"
16 17 18