The key findings of the present study is that oral spore-based probiotic supplementation reduced symptoms indicative of "leaky gut syndrome".

To determine if 30-d of oral spore-based probiotic supplementation could reduce dietary endotoxemia.

Core tip: Dietary or metabolic endotoxemia is a condition that affects approximately 1/3 of individuals living in Western society. It is characterized by increased serum endotoxin concentration during the first five hours of the post-prandial period following consumption of a meal with a high-fat, high-calorie content. The key findings of the present study, were that 30-d of oral spore-based probiotic supplementation reduced the incidence of dietary endotoxemia, which may be indicative of reduced gut permeability. 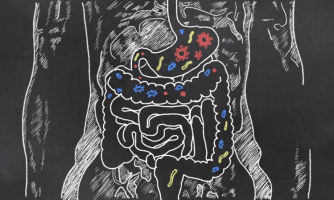 Results showed statistical significance in the spore-based probiotic group with a 42% reduction in post-prandial endotoxin, a 24% reduction in triglyceride, as well as significant reductions in post-prandial pro-inflammatory cytokines, IL-12p70 and IL-1. The results of the study suggest that oral spore-based probiotic supplementation may be a wonderful adjunct to a healthy diet and lifestyle for reducing symptoms indicative of “leaky gut syndrome”.

Beneficial spore-forming Bacillus strains are able to produce various antimicrobial and antifungal lipopeptides that help balance the internal bacterial environment within the host. Spore-based probiotics microbial balancers help to reduce or prevent overgrowth of pathogenic bacteria within the small intestines (SIBO), such as Candida albicans. Unlike lactic acid bacteria, spore-based probiotics are much more competitive against other strains, keeping invaders at bay and giving the host greater opportunity to return to homeostasis more quickly. After doing a complete secretome analysis, Cornell University determined that B. subtilis and B. clausii spores have intrinsic antibiotic-resistant genes and no toxin-producing genes, and can inhibit the cytotoxic effect of C. diff and B. cereus toxins.

A cell culture study showed that B. subtilis “can effectively maintain a favorable balance of microflora in the GI tract” as it produces a protective extracellular matrix...that could potentially protect an entire community of probiotic cells against unfavorable environmental conditions.” Data from the same study found that B. subtilis cells “possess robust anti-biofilm activity against Staphylococcus aureus through activating the antimicrobial lipopeptide production pathway.” In vitro data showed that B. subtilis to inhibit the growth of Candida albicans and E. coli.

Furthermore, supplementation with this species presented an increase in beneficial Bifidobacteria within the intestinal microbiome, which is shown to result in improved intestinal barrier function, lower inflammation, and lower LPS levels. This may help achieve favorable clinical outcomes for symptoms associated with irritable bowel syndrome and inflammatory bowel diseases that are caused by dysbiosis.
Last edited: Aug 17, 2021
D

Thanks for this, I just started taking these with my meals after listening to Matt Blackburn as he recommends this to anyone who feels sleepy after eating.

Don said:
Thanks for this, I just started taking these with my meals after listening to Matt Blackburn as he recommends this to anyone who feels sleepy after eating.
Click to expand...

Care to point to the product page?
Z

Makrosky said:
Care to point to the product page?
Click to expand...

Zachary Bush said:
I would assume the brand is Just thrive probiotic since Blackburn has endorsed that brand before
Click to expand...

No Problem ! I've used them in the past and found them to work well. Also while taking them i got the best sleep for some reason

Looks like the study used Megaspore. Just Thrive is the retail version which doesn’t contain B. licheniformis. I would assume both are similarly effective.
B. licheniformis and B. subtilis are the two bacteria in the Ukrainian probiotic called Biosporin, which Ray Peat recommended at some point for people who are afraid to experiment with antibiotics.
G

Interesting study, thanks for posting. I was going to use Megasporebiotic a while ago but got slightly put off from taking it after reading this. Why I Do Not Recommend the "Probiotic" Just Thrive, A Review

I should experiment with it and see how I feel nonetheless as I've read a lot of positive experiences with it.

There are alternatives to Megaspore which are effective as well

The study was in hyper-responders to LPS. Not sure if the results translate at all to the general public.

Most of the general public is unhealthy and suffer from gut issues due to a high omega-6 diet, so I believe it would translate quite well. Also the responders were still referred to as "apparently healthy" in the study.
J

"Identification of “responders” Experimental meal challenge: Subjects reported to the laboratory between 0600 and 1000 following an overnight fast (> 8-h) and abstention from exercise (> 24-h). Following collection of a pre-meal blood sample, subjects were provided a high-fat meal (85% of the daily fat RDA and 65% of the daily calorie needs based on RMR). Thin crust cheese pizza from a local vendor was used as the high-fat meal source (Table 2). Blood samples were measured for endotoxin concentration after the meal and only those subjects whose endotoxin level increased by > 5-fold at 5-h post-prandial were classified as “responders” and enrolled in the supplementation phase of the study. This same experimental meal challenge was completed at the end of the supplementation period to assess the effectiveness of spore-based probiotic supplementation at modifying the serum endotoxin response."

This is selection bias.
D

Makrosky said:
Care to point to the product page?
Click to expand...

I am in Canada (selection not great) and it only had coagulans in it but at least something on the shelf to buy i can try.
R

I've tried this before. Made the situation worse. I gained weight that took a few weeks to come off and I couldn't sleep for a week. I had bad adrenaline symptoms.
You must log in or register to reply here.
New posts

Oral allopregnanolone coming soon to a pharmacy near you
2

A
Difference between sublingual vs oral for substances?

E
Can I use oral Ginko biloba and topical minoxidil?

Mar 1, 2021
fico
F
P
Best Form Of Zinc For Oral Coating As A Mitigator For Colds/Viruses?

Nov 14, 2020
Barry
B
O
Those Who Tried Oral Pregnenolone: Did You Notice A Facelift Effect?

What Is The Best Form Of Oral Magnesium That You've Taken?
2 3

A
Whose Are Being Exposed To Talc(oral) Daily Here?

MSM Same As Flowers Of Sulphur For Oral Thrush?

B
How To Optimise Oral Ingestion Of An Enzyme?

Mar 30, 2020
BrianF
B
B
Impact From 25mg Pregnenolone Oral Daily On Progesterone And DHT Levels?

Can Oral Bacteria Affect The Microbiome Of The Gut?