Kamba kids live in similar conditions but anaemia and inflamation are much less prevalent among them (on fortified cereal diet and low milk).

Plasma IgG is not a conclusive indicator for intestinal inflammation, and a 10% difference is hardly meaningful, imho. The rest of the study reads like a commercial for junk iron supplements.
B

Please post evidence, comments from Ray that show he doesn't believe your title. Or be specific about how this subject is "Anti-Peat".

Birdie said:
Please post evidence, comments from Ray that show he doesn't believe your title. Or be specific about how this subject is "Anti-Peat".
Click to expand...

Stone me if i am wrong, but didnt ray even say that iron could be a issue on a predominently milk based diet? If so then i dont think this thread is realy anti-peat category.

I guess it heavily depends on the animals food intake aswell. Dont they also drink the blood? That would count for some iron i guess?
What i recommend or post is not absolute. Take what makes sense or work for you and discard the rest.

Ben. said:
Stone me if i am wrong, but didnt ray even say that iron could be a issue on a predominently milk based diet? If so then i dont think this thread is realy anti-peat category.

I guess it heavily depends on the animals food intake aswell. Dont they also drink the blood? That would count for some iron i guess?
Click to expand...

My impression is that Ray is very anti-iron. It is dicussed in many threads here how coffee and milk are good due to supressing iron absorption and how meat and cereals are bad due to high iron.
2 quarts of milk will definitely interfere with iron absorption (and other minerals). I just can't comprehend why people take this advice of 2 quarts of milk seriously.

How many threads trashing the Masasi are you going to make? Also their diet is actually excessively high in iron as one of their staples is raw blood.
Princes have persecuted me without a cause

Yawn Sleepsaria said:
How many threads trashing the Masasi are you going to make? Also their diet is actually excessively high in iron as one of their staples is raw blood.
Click to expand...

I can only think of Maasai who would drink 2 quarts of milk or more and be happy :)

Some additional info on the Maasai. Ignore the vegan bias. Sources are in the videos.

Apollo said:
Kamba kids live in similar conditions but anaemia and inflamation are much less prevalent among them (on fortified cereal diet and low milk).
Click to expand...

I see what you meant then. I don't see the conclusion that it is anti-peat. Peat calmly takes people where they are. He could find it interesting if he is unaware of it, but I doubt that.

Birdie said:
I see what you meant then. I don't see the conclusion that it is anti-peat. Peat calmly takes people where they are. He could find it interesting if he is unaware of it, but I doubt that.
Click to expand...

The conclusion is Ray Peat is not Maasai and has nothing to do with drinking gallons of Milk. :)

Maybe the introduction of iron-fortified cereal damaged their metabolism, as from reading the study all of the Maasai subjects chosen were already attending the early childhood development centres and eating the food provided at the time the study began. Also says further down their access to the cereal was inconsistent because during roaming periods they did not attend the feeding clinic.

There's also no timeframe provided for the study for the collection of the demographic information or the blood. Or if each child was given one blood test or multiple.

The cereal could have induced the inflammation, and allergic reactions to vitamins added to foods is quite common.

Anyhow in the Maasai subjects, their diet was substantially different from that of traditional Maasai people because of eating cereal, whereas the pastoralist Kamba diet already contains grains. The design of the study makes drawing any conclusions from the information nearly impossible with all the external variables, which is acknowledged in the latter part of the study.

Mosquito nets and deworming treatments are used by Kamba people more often. Much of the differences could be accounted for by access to sanitation or insect repellants. Namely, differential use of rainwater as drinking water and prevalence of pit latrines.

It seems far more likely that drinking water contaminated with parasites would be the cause of nutrient malabsorption, as is the case in most of Africa.

Apollo said:
Kamba kids live in similar conditions but anaemia and inflamation are much less prevalent among them (on fortified cereal diet and low milk).
Click to expand...

low weight to age (WAZ) z-scores and low height for age (HAZ) z-scores significantly worse among Kamba than Maasai. Kamba children more likely to be malnourished, underweight and stunted than their anaemic Maasai countrymen. It pays to read the study fully! 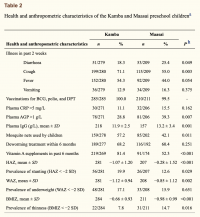 Seems that immunologically (less fever, cough, vomiting) and lower prevalence of stunting and underweight, the Maasai are better off because of their diet than the Kamba even though they are relatively more disadvantaged because of the rest of their lifestyle.

Diarrhoea, elevated c-reactive protein and nutritional deficiencies are all side effects of water-borne diseases or parasitic infection.

It is strange to me that the focus in this area of the world would be the provision, by UNICEF, of inoculation and Unimix (which contains cheap but antimetabolic soy beans, cornflour and vegetable oil), instead of clean drinking water and adequate sewerage or plumbing.

Not to mention giving people their own means to treat waterborne diseases through reliable access to anti-parasite treatments or antibiotics which should be easy to obtain if the supply wasn't contaminated by the commercial interests of the producers and distributors.

A little bit tangential but it reminds me of Nestlé's distribution of baby formula in Africa, which constitutes a crime against humanity and is a blindspot for anti-racists everywhere. And note below:

Klaus Schwab as publisher of the World Economic Forum's 2010 "Global Redesign" report postulates that a globalized world is best managed by a self-selected coalition of multinational corporations, governments (including through the UN system) and select civil society organizations (CSOs). He argues that governments no longer are "the overwhelmingly dominant actors on the world stage" and that “the time has come for a new stakeholder paradigm of international governance”. The WEF's vision includes a "public-private" UN, in which certain specialized agencies would operate under joint State and non-State governance systems. 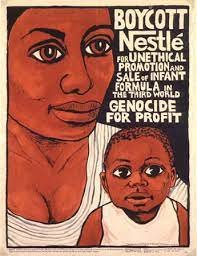 But.... are they? They simply took some blood markers and then compared it against some arbitrary lab ranges, and made this conclusion based on that.

They keep on claiming "Anaemia," but their only definition is hemoglobin lower that 110 g/L.

Okay, so the Masai Children had lower Hemoglobin and Ferritin thatn Kamba Children (who ate more iron). So what?

So, are these children weak and fatigued? Suffering irregular heartbeats, or shortness or breath? Or, are they acting like healthy young children of a similar age?

Peat even addresses this in his "Iron's Dangers" article-

In a study of the "malnourished" children of migrant fruit pickers in California, these children who were "seriously anemic" were actually more resistant to infectious diseases than were the "well nourished" middle class children in the same region.
Click to expand...

If the normal amount of dietary iron causes an increased susceptibility to infections even in children, and if a subnormal amount of iron slows the aging process, I think we are going to have to reconsider our ideas of nutritional adequacy, to look at the long range effects of diet, as well as the immediate effects. My current studies have to do with analyzing our ability to handle stress safely, in relation to our diet. I believe our nutritional recommendations for iron have to be revised sharply downward.
Click to expand...

E.D. Weinberg points out something similar in "Exposing the Hidden Dangers of Iron." In the 60's Marori Newborns were thought to be "Anemic," so they started injecting them with Iron Dextran. With the injections, the rates of Malaria doubled, and the rates of E. Coli increased 7 fold. There were no recorded infant deaths prior the injections, 22 during the experimental period, and returning to 0 when they were stopped.

Sure, Masai children might have lower hemoglobin and ferritin than another group of children. That doesn't necessarily mean they are less healthy, or even have anemia. This is the risk of diagnosing by blood tests, and nothing more.

Man. I specifically listened to Ray Peat explain the problems of a red-meat free diet, due to the necessity of iron, and how a diet of potatoes and dairy could be perfect except for iron deficiency.

He merely says that we overrate the importance of iron, and the proposed healthy range should be lowered significantly!

So what you may find on this website is many people who are high in iron, and trying many ways to lower it. It’s always best to start with the source material (Ray himself), and go here for questions or personal experiences pertaining to your stuff. Not all the opinions on this website are even of Ray’s.

I think people would benefit from a word search of Ray’s writings and listen to relevant “Ray Peat Clips,” before bothering with the forum.

Everything a westerner touches is full of iron.

It's fortified in every processed wheat product and infant formula, it leaches in higher quantities from the soil into water and produce due to acid rain, it's in pharmaceuticals (like birth control) and so on.

To compare that to the Masai and try to unify the conclusion is short sighted.

I'd gather that if there is any need for concern in the masai diet (if that's actually the cause of the conclusions) its the intake of blood which has many more variables than iron and a general lack of diversity in the diet.
You must log in or register to reply here.
New posts

Check This Out! Look HOW MANY Vaccinations They Are Giving Vulnerable Kids Now

Nov 24, 2021
Kayaker
K
B
Creepy Pfizer Ad Tells Kids they are “Superheroes” for Taking Jab, Ignores Injuries of Others

What will the future look like when we do this to kids?
2

Vitamin A For Kids

Breathable Mattress Protector Or Plastic Sheet For Kids, Any Danger?

Kids - They Know What's Up

M
Do Kids Know The Truth?

S
What happens when you expose a generation of kids to high lead levels?

G
What kids around the world eat for breakfast

Wednesday at 9:32 AM
Ismail

L
The Real Reason for High Gas Prices - NOT what you think.