How likely do you think is a total collapse of society in 2022? (Poll)

How likely do you think a total collapse of society is in 2022?
Total collapse meaning no electricity or supermarkets for at least a week . Nationwide.
Last edited: Jan 5, 2022
Check out my Twitter:
https://tinyurl.com/x85hyps3
A

Unless something changes my bet is 2024

The primary manifestation is the breakdown of trust and effective communication between private citizens. The technocratic solution is smart contracts.

If all goes to plan, for many life isn't going to feel worth living. The future is already in our hands.
L

How would they keep people distracted with no electricity

Lord Cola said:
How would they keep people distracted with no electricity
Click to expand...

Yeah, that's a good point. I'm wondering what would they get out of a total collapse? Maybe a few days of no electricity and/or cyber attack to reinstate something new, but other than that they want occupied peasants who take their SSRI's and are stored away in the metaverse.
Check out my Twitter:
https://tinyurl.com/x85hyps3
L

Mauritio said:
Yeah, that's a good point. I'm wondering what would they get out of a total collapse? Maybe a few days of no electricity and/or cyber attack to reinstate something new, but other than that they want occupied peasants who take their SSRI's and are stored away in the metaverse.
Click to expand...

Usually they would use a small number of shocking, focused events like 9/11 and then perpetuate the consequent sense of mass terror with media-amplified small attacks or fake events (impressions of attacks without actual events, e.g. through constant publication of alarming headlines with no backing evidence) and a general atmosphere of insecurity. But they have been getting a lot bolder.
P

Mauritio said:
Yeah, that's a good point. I'm wondering what would they get out of a total collapse? Maybe a few days of no electricity and/or cyber attack to reinstate something new, but other than that they want occupied peasants who take their SSRI's and are stored away in the metaverse.
Click to expand...

the metaverse/alternatives are probably the end of humanity. if social media didn't already do that
Last edited by a moderator: Jan 6, 2022

PointOutside said:
the metaverse is probably the end of humanity. if social media didn't already do that
Click to expand...

Yes do you remember the first seasons of the show "black mirror" ? This is scary accurate... 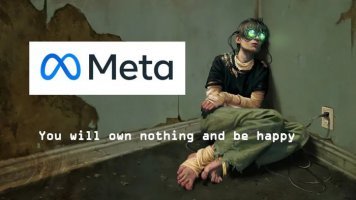 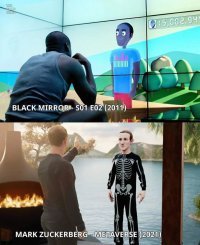 yeah of course. i can imagine someone spending their entire day/month/year in the metaverse as someone else and then talking their headset off at night only to look in the mirror and hate themselves. i think about those who already have negative views of themselves only to have that become much much worse. also think about how everyone adopted the internet and then social media. people aren't aware how advanced CONSUMER virtual reality technology has gotten. forget just the visual aspect.. there are gloves, body suits, treadmills that (and i've tried these through university) seriously deceive you when used in combination. obviously i knew it's VR but it was truly scary how realistic it was. the creepiest part was looking into a mirror (in-game) in these super expensive vr setups

Talking with a family member the other day, I told them the only thing I knew for sure was this was cover to bail out the same big banks and investment houses that brought down the market in 2008. Possibly to steal an election too. I told them the financial institutions were insolvent and there was not enough to bail them out even when it's kept quiet like the FED did this time around. NWO has been a theme for a long time and one world currency has been too. I have no idea if this is the play, but if it is a cyber attack blamed on the Russians that brings down the internet, that would do the trick to usher in a Global Central Digital Currency. If the internet goes down 60%+ of America would lose their minds. Not to mention you couldn't buy anything with plastic and you can't get money out of your bank, and bitcoin wont work either. Most would think from all the previous examples that everything will be restored in a couple days and up to a week at most. At first most wouldn't panic, this is your time to stock up on necessities to live if you have cash, and I mean immediately. Do I think this will happen, no clue. But if it does, I'm buying all the condensed sweetened milk I can haul, along with rice, beans, and frozen OJ if I think I have a way to keep it frozen. Plus water. God help us because when they finally announce debt forgiveness and the new digital currency the vast majority will take it just get TikTok, YouTube, and Instagram back.

“If you don't read the newspaper, you're uninformed. If you do, you're misinformed.” ~ Mark Twain​ 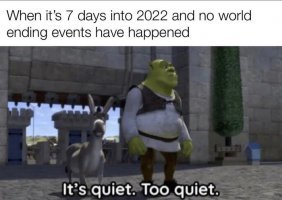 This is one of the questions that is best solved by turning it around with a "What if society has already collapsed?"
P

Lampshard said:
This is one of the questions that is best solved by turning it around with a "What if society has already collapsed?"
Click to expand...

Yeah I’m with you on that one. Everyone is distracted is saying “when?” but it kinda already happened
K

How would people not have electricity? It's from nuclear reactors that generate power on our soil. Pic related. 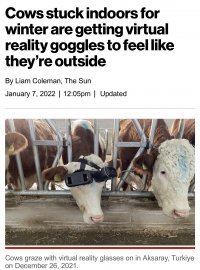 We're in for some trouble this year.
Inflation /stagflation is certainly not transitory and is going to get a lot worse.
There might also be shortages of fertilizer and seeds coming... 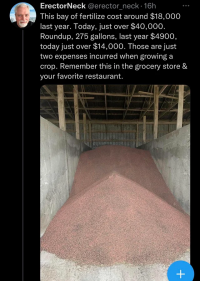 “I’ve been doing this 30 years and I’ve never seen markets like this,” Currie told Bloomberg TV in an interview on Monday. “This is a molecule crisis. We’re out of everything, I don’t care if it’s oil, gas, coal, copper, aluminum, you name it we’re out of it.”

"I've Never Seen A Market Like This": Goldman Sees Shortages Of Everything, "You Name It, We're Out Of It" | ZeroHedge

Mauritio said:
How likely do you think a total collapse of society is in 2022?
Total collapse meaning no electricity or supermarkets for at least a week . Nationwide.
Click to expand...

It won't happen, because the hidden ones who control us won't let it happen.
H

The elite are mentally ill, iw
You must log in or register to reply here.
New posts

Does high testosterone make you more likely to be gay or have ED? Some observations from guys I see/know
4 5 6

MRNA vaccines likely to integrate into the genes

Increased activation of vitamin D (1,25D/25D ratio) is likely to be linked to disruption of the bone-kidney-parathyroid endocrine axis.

Is this study about vitamin A most likely a lie to protect the use of isotretinoin?

Has anyone tried eating a "real" Thyroid Gland (from Beef most likely)?

DHT, not T, likely the "active" androgen in heart and brain
2

The stock market likely compromised/fraudulent to its core
2 3

German Study: Laboratory Accident Most Likely Cause of Coronavirus Pandemic
2

Glaucoma likely a metabolic disease, treatable by pyruvate and/or niacinamide

Y
Most Likely Cure To Coronavirus Seems To Revolve Around Angiotensin

Bulletin Of Atomic Scientists: Nuclear War Is More Likely Than It Ever Was In The History Of Mankind

Serotonin Causes The Startle Response, And Likely PTSD As Well
2

PUFA And Serotonin Promote Each Other, And Likely Cause Mental Illness

Hyperkalemia? Chronic Chest Pains Likely Caused By Too Much Potassium
2

Am I Likely Not Getting Enough Magnesium?

The Stereotypes About Testosterone (T) Are Likely Wrong

Which Of These Supplements Would Most Likely Be Causing Excessive Hunger?
2

High Serotonin Is A Likely Cause Of Most Types Of Fractures

Serotonin Is The Likely Cause Of Septic And Anaphylactic Shock