Hidden Nasties In Our Food

“Irvington Seafood of Irvington, AL, is recalling its 1 lb. packages of "Crabmeat: Jumbo, Lump, Finger, and Claw meat" because they have the potential to be contaminated with Listeria monocytogenes, an organism which can cause serious and sometimes fatal infections in young children, frail or elderly people, and others with weakened immune systems. Although healthy individuals may suffer only short-term symptoms such as high fever, severe headache, stiffness, nausea, abdominal pain and diarrhea, Listeria infection can cause miscarriages and stillbirths among pregnant women.

The recalled "Crabmeat: Jumbo, Lump, Finger, and Claw meat" were distributed to distributors located in Alabama, Georgia, Louisiana, and Mississippi.

The product comes in a 1 lb. containers, package marked with license number AL 111-C with the company name “Irvington Seafood.”

Irvington Seafood of Irvington, AL, is recalling its 1 lb. packages of "Crabmeat: Jumbo, Lump, Finger, and Claw meat" because they have the potential to be contaminated with Listeria monocytogenes

Six-month-old food tech company, Plantish, says it made a fully structured, boneless cut with the same nutritional value as the fish, minus the mercury and toxins

www.timesofisrael.com
Stop being divided and conquered - Ray Peat
A 'conspiracy theory' is just spoiler alert
If you don’t want me to theorise don’t conspire ¯\_(ツ)_/¯

Six-month-old food tech company, Plantish, says it made a fully structured, boneless cut with the same nutritional value as the fish, minus the mercury and toxins

If it is not fish then I cringe to know what “plantish” means.

Aluminum contents were determined by atomic absorption spectrometry in samples of human milk in the colostrum, intermediate, and mature stages; infant formulas from eight manufacturers; and various types and brands of commercially available cow's milk. Results: Mean aluminum concentration was... 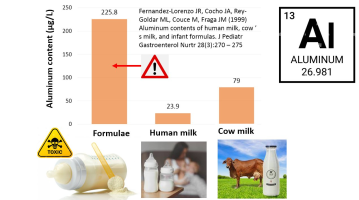 Aluminum contents were determined by atomic absorption spectrometry in samples of human milk in the colostrum, intermediate, and mature stages; infant formulas from eight manufacturers; and various types and brands of commercially available cow's milk. Results: Mean aluminum concentration was...

Wow again! You are really good at finding the most interesting stuff!


“Aluminum toxicity is well documented and contamination of milk formulas has been implicated as the source of accumulation in bone and brain tissues. The purpose of the current study was to evaluate the aluminum contents of human milk, cow's milk, and infant formulas.”

Probably the cheap vitamins and minerals they use in the formula, contaminated with heavy metals 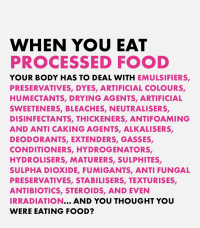 “A new animal drug”? There is a lot of weirdness in our food supply….

***" The article is subject to refusal of admission pursuant to Section 801(a)(3) in that it appears to contain a new animal drug (or conversion product thereof) that is unsafe within the meaning of Section 512. Product contains" [ADULTERATION, 402(a)(2)(C)(ii)] ***

In the past, shipments of processed seafood and analogue seafood (surimi) products have been found to be contaminated with L. monocytogenes. All of these products are processed and are intended to be eaten either without further heat treatment, or with minimal, non-specific, heat treatment such as "Heat and Serve," or "Brown and Serve," or do not bear cooking directions that would consistently result in the destruction of this pathogenic microorganism. 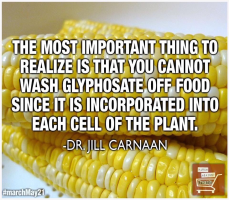 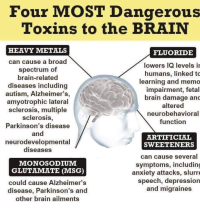 “Glyphosate is a broad-spectrum herbicide sold under the common trade name Roundup®. It was first sold to farmers in 1974 by Monsanto, the company recently acquired by Bayer. Since the late 1970s the use of glyphosate-based herbicides (GBHs) has increased approximately 100-fold (by volume), although some estimates put it at a 300-fold increase.”


“Shockingly, around a third of the 16 samples of products made with organically grown oats also had glyphosate, although these levels were well below EWG’s health benchmark.

So, which products came out best in the EWG report? The five samples, tested by Eurofin Analytical Laboratories, with no detectable levels of glyphosate were as follows:

Nature’s Path Organic Honey Almond granola
Simple Truth Organic Instant Oatmeal, Original
Kashi Heart to Heart Organic Honey Toasted cereal
Cascadian Farm Organic Harvest Berry, granola bar
365 Organic Old-Fashioned Rolled Oats
Of four samples of Bob’s Red Mill Organic Old Fashioned Rolled Oats, one had no detectable levels, one had 10 ppb, and two others had 20 ppb. The presence of any glyphosate in Bob’s Red Mill products led to an uproar in long-time fans of the company, many of whom felt betrayed by the marketing used by BRM. For their part, BRM stated in 2015 that they would begin asking the farmers producing their ingredients to avoid using glyphosate. In response to the recent EWG report, company representatives issued statements such as:

“Our farmers of organic oats are 100% committed to growing their crops by the rules of the National Organic Program. The use of glyphosate as a pre-harvest desiccant isn’t allowed in the growing of organic oats. Unfortunately, even with the rules, it’s still possible for glyphosate to blow over from other non-organic farms. Even still, choosing organic is the best way to avoid pesticides and other chemicals in foods.”


“Some consumers are not happy with that answer, however, and a federal class action against Bob’s Red Mill was filed in August in San Francisco in response to the EWG report. The complaint states that “Consumers have a reasonable expectation that material product information, such as the presence of a probable carcinogen like glyphosate, will be provided by a product manufacturer, especially when the manufacturer affirmatively identifies the health-related attributes of its products”. The complainants say that BRM’s labels and marketing are misleading, given that they promote their products as “wholesome” and healthy.“


“What’s more, companies producing Lucky Charms and Cheerios (found to very high in glyphosate, and generally not considered healthy) have issued simple statements to the effect that levels of the chemical remain below the EPA’s limits. (While I understood the anger of the complainants in the BRM case, I’m inclined to continue to support a company that produces largely healthy food products and is at least attempting to address the issue of food contamination.)“

Over half of all samples of soy (67.4%), wheat (47.8%), rice (80%), and corn (58.6%) contained pesticide residues. These were not the worst offenders, however. A staggering 95.9% of cherry fruit/juice and 90.8% of apple fruit/juice tested positive for pesticides. As for grape fruit/juice and raisins, 92.8% of samples were found to be contaminated, while 92.5% of strawberries were also tainted. As a group, almost four out of five samples (79%) of fruit or fruit products tested positive for pesticides.

This report also lists imported foods, many of which also tested positive for pesticides.“


“List of foods with the most glyphosate
The following could be considered a list of the worst glyphosate culprits, where you’re best to buy organic or choose a different food altogether. These are crops where treatment levels are higher than 50%, i.e. at least half of the non-organically grown foods on this list have been treated with glyphosate. I have also included several crops where the maximum found to be treated was higher than 50 percent. Please note, the figures for pomegranates, pluots, chicory, and Brussels sprouds are based on California (CA DPR) data only (80% or more of U.S. acres grown are in California).

Studies show our healthiest foods contain significant amounts of the pesticide, glyhosate. Why is this a problem and how can we avoid high glyphosate food? 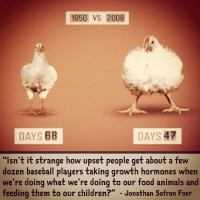 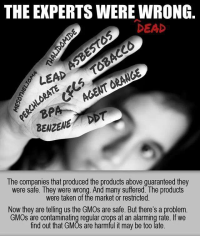 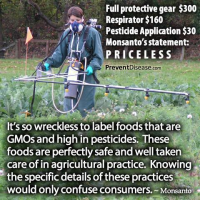 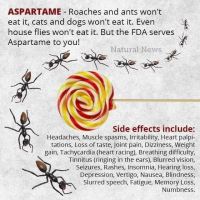 “The CDC estimates that 128,000 Americans are hospitalized each year and about 3,000 die from foodborne diseases every year.”

With few federal regulations, it's up to grocery and convenience stores to decide if and when they notify customers about a food safety recall.

“Gruvipa S. L. of Spain is recalling certain baked goods sold in Florida because the finished product is potentially adulterated with insect filth.

Gruvipa S. L. of Spain is recalling certain baked goods sold in Florida because the finished product is potentially adulterated with insect filth. The

“There were more than 1 billion units involved in product recalls in 2021,” Harvey said. “That was only the second time in the past 10 years that we passed that 1 billion mark.”

“We’re going to pass the mark again in 2022. In just the first quarter, there have already been 913 million units recalled … And that is the highest number of units (recalled) in a single quarter in the past 10 years,” Harvey added.”


https://www.google.com/amp/s/amp.kentucky.com/health-wellness/article262209382.html
You must log in or register to reply here.
New posts

Birth Control Use In Women -- A hidden enemy most aren't seeing? It may not be the "worst," but I think it's part of the puzzle of social "changes"...

D
Are There More Hidden Dangers In Linoleum Vinyl Flooring Than We Realize?

Is There A Hidden Subliminal Message In Ray's Work ?
5 6 7

The Hidden Hazards Of Microwave Cooking

Hidden Side Effects: Half Of Medical Studies Withhold Data On Adverse Results

W
The Hidden Truth About Aspirin
2

F
Can caraagenan be hidden on the label as "natural flavoring"

Association of Ultraprocessed Food Consumption With Risk of Dementia

T
Are IgG food tolerance tests anything to act on?

Jul 30, 2022
Lemminkäinen
L
T
Are IgG food tolerance tests anything to act on?

Indoor Food Farming: Pushing the boundaries of what we know is possible

Anybody got a remedy for stomach ache from spicy food?

I
Anecdote: stress and physical activity far more important too digestion than food

Do you think we will have proper food shortages in the UK?

If we were going to wage a food revolution

Today at 3:21 AM
AlaskaJono
A
I
How bad are nitrates/nitrites in food? Am I wasting my money buying uncured bacon?

N
Lower your stress with food?

An ode to grass-fed ribeye. Manliest food ever?

N
Are these food compliants ?