Demyelinating Conditions Like MS Can Be Treated By Androgens

Ray wrote quite a bit on the topic of estrogen as a causative factor in demyelination and progesterone / pregnenolone as remyelinating agents. I posted an animal study recently on using DHT to completely reverse the pathology of the MS that model.
https://raypeatforum.com/community/...sed-quite-easily-by-change-in-hormones.12571/

This new study finds that the androgen receptor is crucial for the benefits of androgens and its removal or blocking with an anti-androgen eliminates the benefits of the therapy. While the study did not go as far as to claim that an anti-androgen could actually directly cause MS, the link is rather clear. For the record, testosterone, DHT and the synthetic androgen were all quite successful at reversing the pathology. The even better news is that the doses of testosterone and DHT were such to simply achieve physiological levels in the animals as their androgen levels were depressed as a result of the disease. Judging from the embarrassingly little information provided in the "materials and methods" section, the HED for testosterone was about 0.035mg / kg, which means between 2mg - 3mg daily for most humans.

"...Myelin regeneration is a major therapeutic goal in demyelinating diseases, and the failure to remyelinate rapidly has profound consequences for the health of axons and for brain function. However, there is no efficient treatment for stimulating myelin repair, and current therapies are limited to anti-inflammatory agents. Males are less likely to develop multiple sclerosis than females, but often have a more severe disease course and reach disability milestones at an earlier age than females, and these observations have spurred interest in the potential protective effects of androgens. Here, we demonstrate that testosterone treatment efficiently stimulates the formation of new myelin and reverses myelin damage in chronic demyelinated brain lesions, resulting from the long-term administration of cuprizone, which is toxic for oligodendrocytes. In addition to the strong effect of testosterone on myelin repair, the number of activated astrocytes and microglial cells returned to low control levels, indicating a reduction of neuroinflammatory responses. We also identify the neural androgen receptor as a novel therapeutic target for myelin recovery. After the acute demyelination of cerebellar slices in organotypic culture, the remyelinating actions of testosterone could be mimicked by 5α-dihydrotestosterone, a metabolite that is not converted to oestrogens, and blocked by the androgen receptor antagonist flutamide. Testosterone treatment also failed to promote remyelination after chronic cuprizone-induced demyelination in mice with a non-functional androgen receptor. Importantly, testosterone did not stimulate the formation of new myelin sheaths after specific knockout of the androgen receptor in neurons and macroglial cells. Thus, the neural brain androgen receptor is required for the remyelination effect of testosterone, whereas the presence of the receptor in microglia and in peripheral tissues is not sufficient to enhance remyelination. The potent synthetic testosterone analogue 7α-methyl-19-nortestosterone, which has been developed for long-term male contraception and androgen replacement therapy in hypogonadal males and does not stimulate prostate growth, also efficiently promoted myelin repair. These data establish the efficacy of androgens as remyelinating agents and qualify the brain androgen receptor as a promising drug target for remyelination therapy, thus providing the preclinical rationale for a novel therapeutic use of androgens in males with multiple sclerosis."

"...After 12 weeks of cuprizone demyelination of the corpus callosum, castrated male mice were treated for 6 weeks with subcutaneous Silastic® implants filled either with testosterone, 5α-DHT or 7α-methyl-19-nortestosterone. Controls received an empty implant. As reported above, the testosterone implants produced plasma and brain levels of the hormone comparable with those observed in normal males. The 5α-DHT implants produced physiological levels of the hormone in plasma and brain as determined by gas chromatography/mass spectroscopy (0.55 ± 0.12 ng/ml in serum and 0.96 ± 0.14 ng/g in brain). For comparison, brain levels of 5α-DHT measured in intact males or in castrated males receiving a testosterone implant were 0.25 ± 0.06 ng/g and 0.5 ± 0.04 ng/g, respectively. The 7α-methyl-19-nortestosterone implants produced plasma levels of the androgen in the range required for a full suppression of sperm production in males as determined by a specific radioimmunoassay (2.12 ± 0.31 ng/ml) (von Eckardstein et al., 2003). Under these experimental conditions, testosterone, 5α-DHT and 7α-methyl-19-nortestosterone were equally efficient in stimulating the recovery of oligodendrocytes (Fig. 8A) and strong remyelination (Fig. 8B)."
The opinions expressed here are strictly my own, and provided for informational purposes only. They are not a substitute for a doctor’s medical care/advice. Health decisions about anybody should always be vetted by a doctor. Click HERE for FTC mandated disclosure of material connection.

This study shows a huge correlation between low testosterone and MS in men:

The influence of gonadal hormones on multiple sclerosis (MS) is not well characterized and has thus far been investigated primarily in animal models or as a proposed therapeutic approach. We investigated a potential association between testicular hypofunction, as a proxy for low testosterone levels, and MS risk through analysis of linked English national Hospital Episode Statistics from 1999 to 2011. We report a strong positive association between testicular hypofunction and subsequent MS (rate ratio = 4.62, 95% confidence interval = 2.3–8.24, p < 0.0001). Future work should aim more directly to elucidate the relationship between testosterone levels and MS in both males and females. Ann Neurol 2014;76:625–628

and, a small study of 10 men. Testosterone stopped brain degradation, and reversed it even.

Multiple sclerosis (MS) is an inflammatory and neurodegenerative disease of the central nervous system. While current medication reduces relapses and inflammatory activity, it has only a modest effect on long-term disability and gray matter atrophy. Here, we have characterized the potential neuroprotective effects of testosterone on cerebral gray matter in a pilot clinical trial. Ten men with relapsing-remitting MS were included in this open-label phase II trial. Subjects were observed without treatment for 6 months, followed by testosterone treatment for another 12 months. Focal gray matter loss as a marker for neurodegeneration was assessed using voxel-based morphometry. During the non-treatment phase, significant voxel-wise gray matter decreases were widespread (p≤ 0.05 corrected). However, during testosterone treatment, gray matter loss was no longer evident. In fact, a significant gray matter increase in the right frontal cortex was observed (p≤ 0.05 corrected). These observations support the potential of testosterone treatment to stall (and perhaps even reverse) neurodegeneration associated with MS. Furthermore, they warrant the investigation of testosterone's neuroprotective effects in larger, placebo controlled MS trials as well as in other neurodegenerative diseases. This is the first report of gray matter increase as the result of treatment in MS.

haidut said:
Ray wrote quite a bit on the topic of estrogen as a causative factor in demyelination and progesterone / pregnenolone as remyelinating agents.
Click to expand...

haidut do you know anything about niacinamide possibly healing nerve damage? what would be the possible mechanism for this?

ddjd said:
haidut do you know anything about niacinamide possibly healing nerve damage? what would be the possible mechanism for this?
Click to expand... 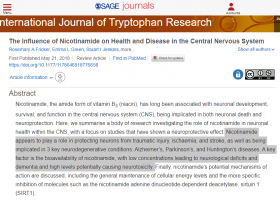 You must log in or register to reply here.
New posts

Has Anyone Resolved Chronic Health Conditions By *quitting* Supp

Nicotine May Help Asthma And Probably Other Inflammatory Conditions

Gut Bacteria May Cause ALL Autoimmune Conditions; Antibiotics Can Cure
11 12 13

Cells Have Memory, And Memories Of Past Conditions Affect Future Response
2

Lifespan / Longevity May Be Tied To Environmental Conditions

Acetazolamide Plus Thiamine As Treatment Of Mental Conditions
2

Vitamin B6 For All Inflammatory Conditions And Cancer

Vitamin B6 May Help Conditions Such As IBS / IBD And Chron's

BREAKING SCANDAL: Members of Congress Treated for COVID-19 with Ivermectin?

Vaccinated patients are being treated with ivermectin and recovering, whilst unvaccinated are refused ivermectin!

Cocoa Or Pre-treated Cacao For Benefit?

(Brain) Cancer Is A Metabolic Disease, Can Be Treated By Glutamine Restriction

R
Cancer Can Be Treated By Calcium Carbonate
2

Enlarged Breasts Are Treated With Progesterone
2 3

Breast Cancer Screening Useless, A Third Of Women Get Treated For Harmless Cancers

"Hypercholesterolaemia Caused By Glyphosate Is Now Treated By Statins"

Enlarged Prostate (BPH) Can Be Treated By Anti-adrenaline Drugs